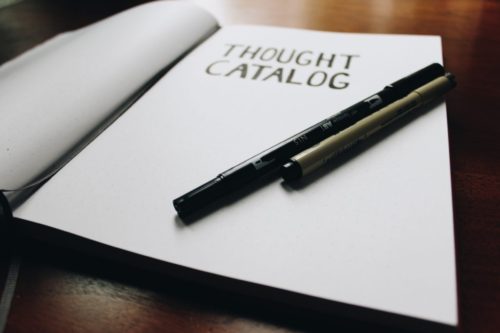 In 2017 when I decided to make my dream of being a writer come true, I stumbled upon some advice from Ray Bradbury.? He said to write lots of short stories, one per week, for a year.? He said it’s impossible to write 52 bad short stories in a row.

I took that advice to heart.? I’ve been writing a lot more than one short story per week.? Someone published one of those stories, Morbid Curiosity, in October.? I wrote about it here. You can buy the short story anthology here.

On Monday, I watched a talk Ray Bradbury gave. He mentioned writing short stories and that he didn’t write his first novel, Fahrenheit 451, until he was 30.? But he also mentioned a few other things that really stuck with me and I’d like to share them with you.

There is Joy and Wonder in Writing

Yes, you read that right. Writing is a joy. If you aren’t excited to sit down and write then do something else.? He said so many people sit down and think about being published and getting movie deals and forget the main purpose of writing: to write the stories you want to read.

One shocking piece of information he shared is all his stories came to him by surprise.? He never sat down with some idea niggling at him. He got up every morning and just wrote whatever was on his mind (which is another piece of advice he gave that I have been following for almost two years now).

All his stories were born out of some idea that fell onto the page while he was writing or talking to a friend or going about his daily life.

That advice is so freeing I printed it out and taped it to my computer screen. I’m always putting immense pressure on myself to write the next great book that everyone will rave over.? No wonder I can’t think of anything to write.? So I’ll take a different approach now and live life and be open to the ideas each day will bring.

Go to the Library

Now, this one is easy for me.? My librarians know my face.? But I’m sharing with you in case you don’t do this one.? Mr. Bradbury says to put down your phone and get away from your “damn computer” and go to the library.

Spend time there just browsing the shelves and pick up books that spark your interest.? You’d be surprised what you’d find (there’s that word surprise again). He said to read a lot and to read lots of different things.

Wanna know a secret? Some of the best books I’ve read have been by authors who aren’t very well known.? We often get hung up on whatever book is trending and most times those are the books I find most disappointing.? Go to the library, look at the displays, walk the shelves.

Read One Short Story, One Essay, and One Poem Every Night Before Bed

Reading a lot is where ideas come from.? Mr. Bradbury suggests reading one short story, one poem, and one essay before bed each night.? He says you’ll be surprised at what ideas pop into your head by doing that.

I don’t like poetry. But I went to the library yesterday and got a recently published book of poems about Jack Johnson, the first African American world heavyweight champion.? He accomplished that feat during the height of the Jim Crow era.

Imagine that? I was just walking around the library dreading finding a book of poetry and there this book sat on one of the displays– and I’m the first person to check it out! Ha!

What should you read? Everything and anything! But he did mention a few names to get started with: Richard Matheson, Nigel Kneale, John Collier, Edith Wharton, Eudora Welty, Aldous Huxley, Loren Eiseley and John Cheever, to name a few.

Some of them I’ve heard of, others I had to look up.

So there’s a few of the golden nuggets I got from his speech.? You can watch the full video here.? It’s only 54 minutes and worth every second.

That’s it folks.? I hope that sharing Mr. Bradbury’s advice will help you get back to the real reason why we write: for the joy of it!

Until we meet again…