“Every great dream begins with a dreamer. Always remember, you have within you the strength, the patience and the passion to reach for the stars to change the world.”

When I was a little girl my dad bought me a book about Harriet Tubman. I read that book until the cover fell off. As a girl, I couldn’t put into words why I was so enamored with her. It wasn’t just that she was a hero, I felt a connection to her, a connection I still feel to this day, and I can’t explain why.

I visited the Underground Railroad Visitor’s Museum shortly after it opened a few years ago, but there was another place I wanted to see: the Bucktown General Store.

If you don’t know Mrs. Tubman’s story, let me share just a small piece with you. When Harriet was a young girl, about 12 years old, she was at the general store running some errands for her master. While she was there, another enslaved man was there who left the plantation with permission. That enslaved man’s overseer demanded that Harriet help restrain this man and she refused.

The overseer grabbed a two-pound iron weight from the counter and threw it at the “fugitive” but it missed him and hit her in the head. She suffered from this near fatal blow for the rest of her life.

The store where Harriet was struck is still standing. I have always said that I would see it one day. That day finally happened. On the way back from celebrating my daughter’s 19th birthday in Ocean City (Maryland), I turned off the main road leading home to see the general store and the plantation where Harriet was enslaved.

It was a most auspicious occasion for me.

The store sits as if it is any other ordinary building at a rural crossroads which I find symbolic. A gravel driveway serves as its parking lot. I came upon it from the left, but swung around to get the crossroads view.

Of course, I parked and got out to walk around and take more photos. The road is so quiet that I stood in the middle of the street to take this shot.

Unfortunately, the store wasn’t open (it was Saturday) so I wasn’t able to go inside.

The whole area seemed smothered by a heavy quietness. I felt a sense of dread that I can’t quite explain. The door to the shop speaks to its age.

I peered through the shop window and looked inside. This was such a moving moment for me. The window, though old, still cast off a reflection from the sun (you can see me holding my phone to take the photo), but the inside of the store is still visible.

One day I will go back when the store is open so I can stand inside. A long while passed as I stood there and tried to imagine the scene playing out in front of me I read about so many times. As I did that, a soft breeze began to blow, and I spoke some private words of thanks to Mrs. Tubman.

As I left the porch, I took note of this antique scale. I imagined Harriet placing a heavy bag of something on it, then having to carry it a mile up the road back to the plantation in bone chilling winters and stiflingly hot summers.

I walked around the back of the store and came across an old building.

A withered sign attached to its side told of its purpose and beckoned for assistance in its restoration.

Another structure stood to the left of the smokehouse. It seemed to be some type of shed.

I sat and took in my surroundings, felt the flat land under my feet, and closed my eyes to imagine my ancestors working this land. After a few quiet moments taken to give them thanks for all they endured, I headed a mile up the road to the Brodess plantation, where Harriet was born and lived.

Here is the sign that sits across from the general store.

As I drove up the road my car pushed through that same heavy quietness that surrounded the store. After a short moment, I came upon this sign:

Obviously, I got out to take a picture. Then I drove to an unimpressive gravel lot unbefitting of its sacred location. In front of the home are two markers that relayed, rather unimpressively, the historical importance of the land stretched out before me.

I took a short video of the land around me. On a side note, the photo at the top of this post is a panoramic picture of the land.

I put my phone down and took a moment to walk just beyond the posts and sit on the land. I placed my hands to it and shed a tear or two (yes; I know…I’m such a sap). I thanked Ms. Tubman for all she endured, all she did. I thanked her for her strength, her endurance, her perseverance, her sheer will to fight for the freedom she was entitled to.

I dug my fingers into the land to feel the soil. I am an avid backyard farmer. I know that good soil has a light crumbly feel. The compacted soil lacked that familiar feeling.

I’d like to think that soil is dead, not only from the tobacco and other crops grown on it that are huge nutrient hogs, but also because of the evils that took place there. The writer in me imagines Harriet placing a curse on that land. 🙂

I took in my surroundings for a few minutes more. The adventurer in me wanted to walk up the gravel driveway to the house and knock on the door to ask the owners if their home was the original house Edward Brodess lived in. However, the black woman in me standing on a former plantation thought better of it. 😉

When I got in my car, my kids are my witness, “Get Away” by Earth, Wind & Fire began playing on the XM radio station we were listening to. My kids found this quite appropriate (and hilarious) because there were country-sized, prehistoric bugs flying around the car. 😀

So that is my trip to historic Bucktown. Forgive me for waxing poetic about this visit, but Mrs. Tubman deserves it.

I had reasoned this out in my mind, there was one of two things I had a right to, liberty or death; if I could not have one, I would have the other.

Wrapping up the decade with Christmas lights, a Santa sighting, a new logo and website! {...} 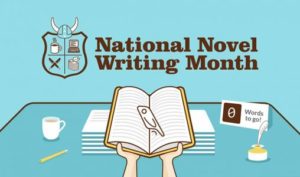 Each year in November, writers all over the world participate in NaNoWriMo. Do you know what that is? Read on {...}

6 thoughts on “Humbled by Harriet”